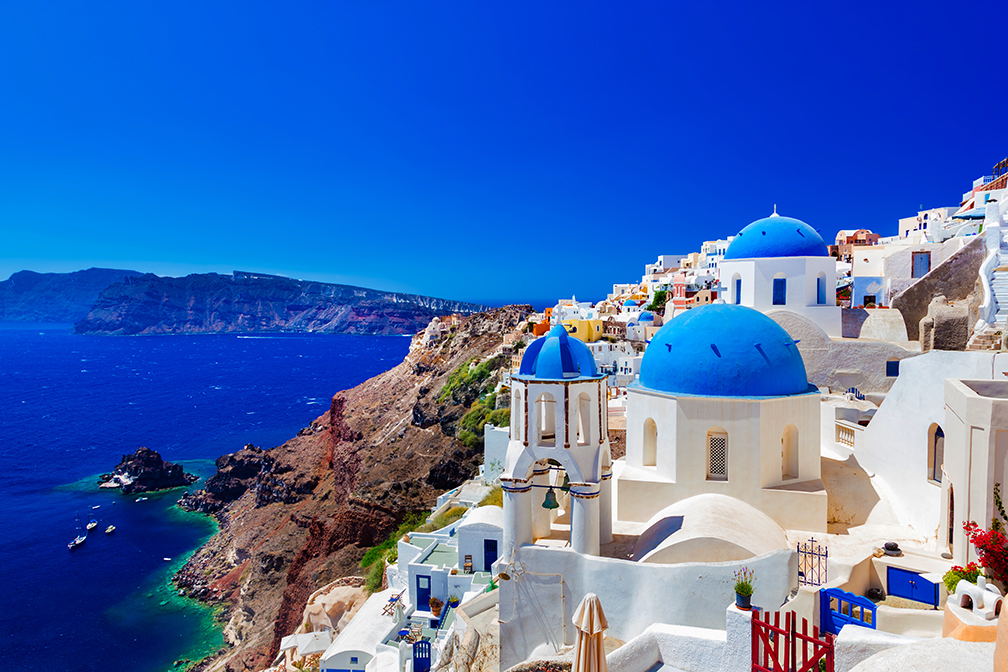 Most of us have heard the legends of the ancient continent of Atlantis described by Plato in his books the Timaeus and the Republic. In recent decades, with advanced technologies in satellite imaging, many people have come to speculate on the location of this once great sunken continent. The guesses have ranged from the continent of Antarctica, to the partially blasted island of Thera in the Mediterranean.

Today Thera is known as the Isle of Santorini, a beautiful Greek Island with many artists, musicians and painters. I have been there. Thera was largely destroyed around 1200 B.C.E. when  a huge volcano exploded there, causing tidal waves across the Agean. Today you can still take snorkeling trips underwater to see its lovely Greek ruins.

Some researchers have speculated that Atlantis lay east in the Indian Ocean, either off the coast of Okinawa, Japan , or south of India in a large sunken land mass that  reaches out towards Australia. Both of these are huge archaeological discoveries because they both reveal evidence of highly evolved ancient civilizations, but neither of them is Atlantis. The land mass south of India was detected by modern day satellites, confirming stories told in the great India Epic The Ramayana, when Prince Rama traveled south to defeat the evil demon Ravana who had captured Rama’s wife. Yet this area south of India was part of the old Rishis Empire, a cousin or perhaps a remnant of Lemuria, not Atlantis.

The enormous sunken pyramids off the coast of Japan, discovered in the 1990’s are equally astonishing. They reveal at least eight huge stone building locations, and each building is far larger than anything man has ever erected. These two images show the height of just one of the its many steps, revealing that whoever built this city long ago, had an enormous stride. They may well have been the Titans or Giants of ancient legend that would dwarf modern day man.

Yet none of these sites is the location of the lost continent of Atlantis. Atlantis lay in the middle of the Atlantic Ocean and the heights of its mountains are the remnants of the Canary Islands. Since Atlantis was destroyed by a combination of an asteroid strike, which fractured the Mid-Atlantic Ridge, and the break up of its two tectonic plates, little remains of the civilization today except the echoed stories of its former greatness.

Take a look at the map below, for the outline of the continent itself conformed to the shape of the coastlines on either side of the Atlantic. You can clearly see the fracture in the Mid Atlantic Ridge.

While there is much that can be said about Atlantis and its long history, we will share only a little bit with you in this article. If you wish to know more, take a look at ordering our DVD on Atlantis.

A SMALL OVERVIEW OF ATLANTIS

First, you should know that at the time of Atlantis, it was the dominant civilization on Earth, and for a long time it was also the seat of a great Galactic Empire, with many extraterrestrial races coming and going from its shores. While there were other less advanced areas of the world, Atlantis advanced to the pinnacle of civilization on this planet, exceeding even the limits of knowledge of where we are today. Many of the people in America and in the world today, are reincarnating from this time because of a desire to make sure that the catastrophes that happened in their world, do not reoccur in ours.

The people of Atlantis were tall and exceedingly attractive. They were said to be graceful and fair in coloring, but as the centuries moved on many dark-haired people also entered the culture so that like our own world, it became a cosmopolitan mixture of many races. The people were also long lived with an average span of several hundred years, explaining the references in our Bible to long lived patriarchs like Methuselah, Lamach and Noah. It was only after the destruction of Atlantis when the full rays of the sun bathed our planet, that human lives began to shorten.

Telepathy was well developed in that society, as well as many other spiritual or psychic gifts, and in the earliest days this served them well. In earlier ages of its existence, Atlantis was divided into ten separate kingdoms ruled by the ten sons of Poseidon, a figure that was clearly a god who had come here from another world. Was he Anunnaki or was he Pleiadian? It is likely that he was Pleiadian, although much later we discover that indeed the Anunnaki gods did establish their own city in Atlantis.

The main capital was Atlan which lay in the province of Poseida. It had three great concentric circles surrounding it, each separated by vast waterways, so they had extensive knowledge of engineering and hydraulics. Since Atlantis was a largely seafaring culture, there were many great ships and an active Navy. For centuries their ships looked similar to the long rowing ships of the Norse with their many oars and proud carved images at the prow. Later, sailing ships joined them, and as the centuries unfolded and technology grew, eventually they had clear circular propulsion sea craft, deep sea divers and submarines.

Atlantis was initially a very peaceful culture with ten kings and one great Monarch, and they lived in harmony with the land, the animals and the planet. Outside of their beautiful cities they raised food, and inside their cities were made of stone and crystal. Throughout the cities construction were great fountains, gardens and crystals, all meant to harmonize the people with the land.

At the center of the inner most capital were the great Halls of Knowledge where a copy of the Emerald Tablets was emblazoned on the walls. These Tablets were written by the great god Thoth, Lord of Wisdom, who ruled Atlantis for over 1000 years. As an Initiate of the Mysteries he sought to emphasize the importance of going within and learning to “Know Oneself.”

hey had museums of learning, coliseums for sports, music concerts, amphitheaters and large domed buildings that were acoustically rich for sound and light shows. They loved horses and had chariot races and wrestling as an important part of their culture. They were also very advanced in the healing arts having discovered the use of sound, vibration and color in treating not only the physical body, but bringing all of the subtle energy bodies into balance.

Being extremely attuned to the life force of all creation, in their architecture and furniture they created beautiful anthropomorphic sculptures, exalting the human spirit as a part of the Divine. They worked consciously to create beauty in all of their furniture, jewelry and clothing, usually wearing light tunics, gowns and flowing fabrics. Head dresses were worn by many of the officials, and like Egypt, they had a Valley of the Kings where their great leaders were memorialized in ornate tombs and monuments. They were also masters or working with both metal and crystal, and understood how to shape both substances for their own purposes. , constructing entire gardens of various metals.

They also had temples of science, education, spirituality, and Council Halls for decision making. In the early days they built temples near the water in order to communicate with the dolphins and mer people, and their priests began to communicate with other Star Systems. At first this was done through telepathy, with many minds joined together. But then, as many of those groups came to Earth to visit, technology advanced and communication centers were set up between planets. Atlantis established landing sites like airports, the design taking the appearance of an enormous human being.

Over time, Atlantis developed sophisticated air travel, using energy towers to create a grid that a small one, two, and four person air craft could travel upon, much as we do with our highways today.  These small air ships were pointed at the front and wide in the back, and were used like cars to get around. They also had moving sidewalks that, like an escalator, moved them quickly for one level to another in their multi-leveled buildings.

As Edgar Cayce shared in his readings on Atlantis, they used crystals in a way that we are just beginning to understand. Today crystals are used as batteries in watches and in computers, but this is only a small part of what they can do. The Atlanteans had developed a type of technology that would allow them to liquefy the crystal and shape it in any way they needed, aligning its structural lattice grid for many useful purposes. Crystals thus became one of their major sources of energy, and because they were proficient with their mental powers, they were able to not only store vast libraries of information within the crystals themselves and retrieve them (thus the famous Crystal Skulls), but to use the crystals to amplify their own creative intention or a machine’s function. While this is an energy efficient way to power the civilization without environmental damage, the misuse of this power eventually destabilized their continent and  contributed its destruction.

Since Atlantis existed for over 40,000 Earth years, it had many stages of growth, and a colony even extended into the sunken areas around Bimini, Cuba and the Caribbean.

EDGAR CAYCE AND BEYOND

The late, great Edgar Cayce foretold that a portion of Atlantis would begin to rise again off the Isle of Bimini in the 1960’s, and  this is just what happened. An underwater road was discovered there in 1968 with huge stones marking some kind of ancient settlement. But as usual, local authorities resisted any genuine attempt to excavate or explore these ruins further.

Then, in the 1990’s other discoveries began to appear off the southwestern coast of Cuba and around the Caribbean Islands, northeast of Cuba as well, indicating a much larger territory of cities and temples that were dropped into the ocean. This is also close to the famous Bermuda Triangle where ships and planes have long been lost at sea.  This anomaly is created by a large pyramid which is  periodically activated, despite the fact that it is now underwater. When it is active, it appears to open up a portal into another dimension, sucking everything in the surrounding area into it, and making if very unsafe for exploration.

Photographs taken in some of these other areas like Cuba and the Caribbean, are far more compelling, showing remnants of steps, entire temples, statues and sculptures that echo like the eerie shadow of some bygone Age. Many of these look images strangely reminiscent of Greek architecture, both civilizations having been designed by the mathematics of the gods.

To Know More about this Fascinating Subject,
Check Out our On Line Webinar on
ATLANTIS: DISCOVERING THE LOST CIVILIZATION

or Order our DVD on ATLANTIS.