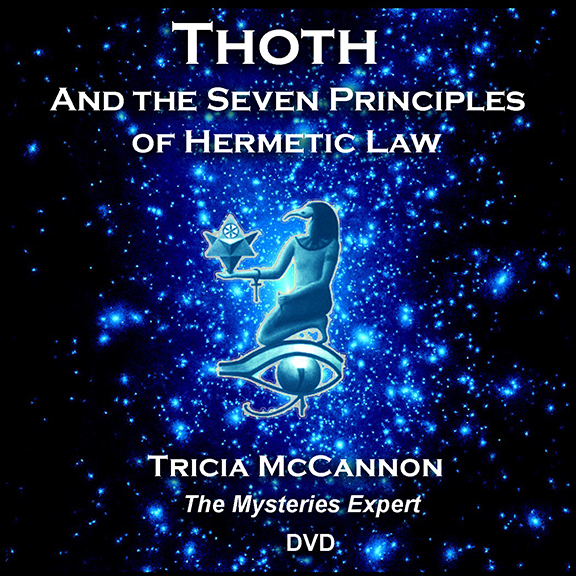 From the wisdom temples of the Great White Brotherhood of Egypt comes the fundamental teachings of the great God of Wisdom, Thoth, the master Initiate. Known to the Greeks as Thrice Great Hermes, or Hermes Trimegistus, the great Master Thoth was an architect, a scientist, a musician, a geneticist, and a spiritual Initiate of the highest level. Thoth, brother of Ra, father of Isis, and son of Enki/Ptah, was the perennial adviser to the Pharaohs of ancient Egypt.

World traveler and world teacher, it was Thoth who designed the great Mystery Schools of the world. Said to have authored over 36,000 books, or a thousand for every day of the year, today only five of his books remain. The Egyptian Book of the Dead, The Kybalion, The Kore Kosmu, (meaning the Virgin of the World), The Emerald Tablets of Atlantis, and The Hermetica, composed around 200 BC, and said to have been derived from this writings.

In this stunning visual presentation we not only journey through the teachings of these famous books, but we discuss Thoth’s Seven Hermetic Laws that underlie the operation of the entire Universe. It is from only one of these principles that the best selling book “The Secret” was derived.

Despite the lapse of more than 5,000 years, the great Master Thoth is revealed as one of the most profound scientists, astronomers, mathematicians, philosophers and mystics our world has ever known. Wherever his work is studied, greatness arises. Leonardo da Vinci, Kepler, Milton, Sir Isaac Newton, Copernicus, Roger Bacon and Shakespeare are but a handful of the great minds who have studied his profound writings.

Come walk with us on a journey of discovery into the life and philosophy of the Master Architect of the ancients. Discover for yourself his profound and timeless writings that are as relevant in our day as they were in his.