Article: Birthchart of the Royal Prince 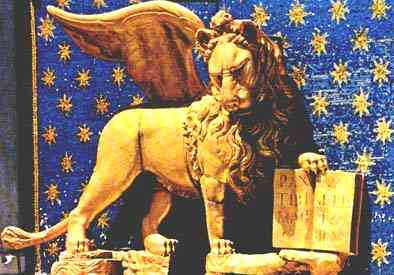 Much of the world held their breath as the first child of the Duke and Duchess of Cambridge was born on Monday July 22nd at 4:24 PM on a full moon in the sign of Leo. Being an astrologer who specializes in understanding how the birth patterns of our Natal Chart define our spiritual mission in the world, naturally I wanted to see what kind of soul and destiny this little darling might be destined for.

To begin with, his Natal Chart is fabulous, a perfect blueprint of the future King of England. It indicates a highly spiritual soul who has come in to awaken his people with kindness, spiritual wisdom and healing and who has the power to transform the monarchy in the highest expression of what it means to be a King. Because the chart is clear, but complex, we will go through the elements one by one.

1. His Sun is at 0 degrees of Leo, the sign of the lion-hearted who leads his people with generosity, and being only 0 degrees into Leo, there is no chance that it will be an egoic rule. This Sun is in the 8th house, the house of the magician, the house of charisma, power, the spiritual mysteries and of transformation, indicating that he may be an agent for change in the world in some way.

2. Beside the Sun sits Mercury, the communicator, still in the 8th house, but it is in Cancer, the nurturer, indicating that in some way his ability to speak to others in a compassionate way will become a transforming aspect of his ruler ship. 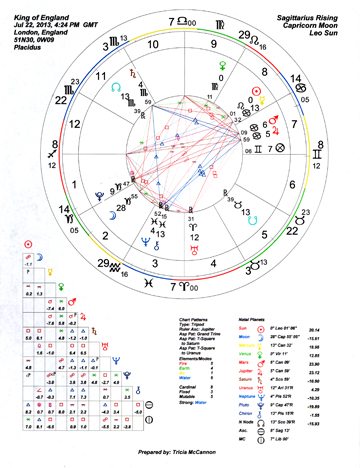 3. Close by in the 7th house of relationships and partnership are Mars and Jupiter in Cancer, only one degree apart. While Mars can often show up as dynamic, egocentric bully, in Cancer it is inwardly turned towards compassion, kindness and care for others. However when under stress it can cause a person internal digestive problems.

4. Mars sits beside Jupiter, the planet of the expansive, optimistic spiritual teacher, in the sign of Cancer, giving him an inherent a love of beauty, spirituality based on acts of kindness, and a positive idealistic approach to relationships based on fairness. He will make sure that both sides on a dispute are treated fairly, and can be a champion for the environment and the underdog. Being in the sign of Cancer, representing Mother, home and nurturing, this indicates a happy loving childhood and a deep level of inner security.

5. These two planets (Mars and Jupiter) in the 7th are increased in their importance in the chart by the presence of his Point of Fortune, a place in anyone’s chart where they feel that their life comes together with great good fortune. In the young Prince’s chart it is in Gemini, signifying that he will be a diplomat and a speaker who will be beloved by the public, and that one of his important objectives in this life is to stay broad minded and to communicate higher spiritual and emotional values to others.

6. The young Prince’s Moon lies in Capricorn, the sign of the government. Moon in Capricorn always reflects a childhood where one must take on responsibilities early, but these challenges will only make him stronger.

7. His rising sign is Sagittarius and it over lights 2/3rds of his First House. This house rules how others see him, and how he comes forward in the world. In its immature state it indicates a party boy, a traveler and a social butterfly that must smell all the flowers, similar to his royal uncle Harry. However in its more evolved state Sagittarius becomes the truth-seeker and spiritual teacher to others, aspects supported by many other elements in the Prince’s chart.

8. One of these elements is the planet Pluto at the end of his First House. Pluto is the planet of deep transformation and change. It rules the spiritual mysteries. In anyone’s chart Pluto in the First House indicates a soul who has come in to do deep inner transformation work on themselves, compressing many lifetimes into one. In this baby’s chart it lies in Capricorn, the sign of the government, telling us once again that he may be an agent for change within the monarchy and the British government itself in a dynamic and charismatic way. 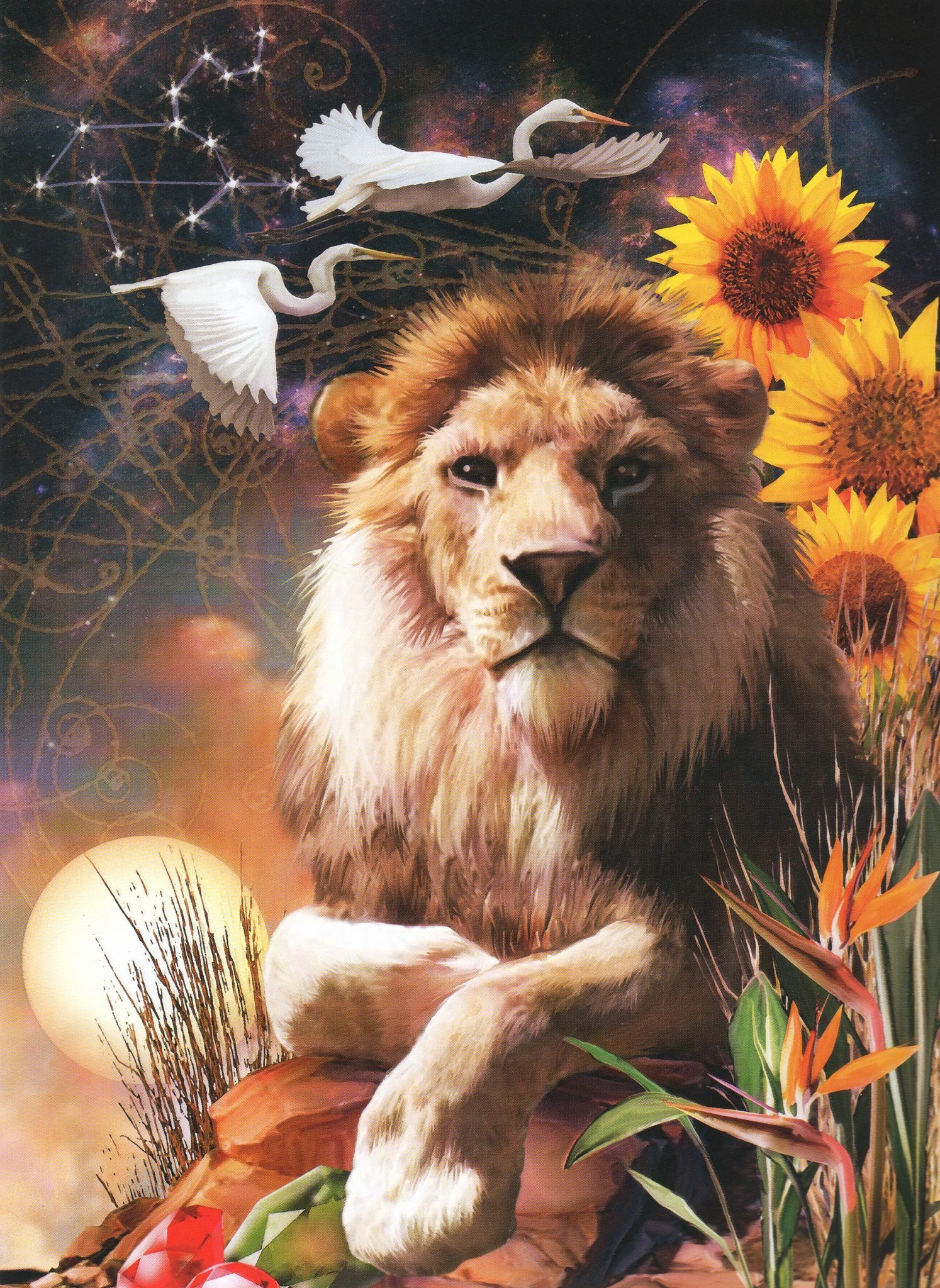 9. This theme continues as we examine his North Node, which always represents a person’s destiny in this life. His North Node and his Saturn (the quintessential secular King) both lie in the 11th House, representing the new age movement, humanitarian efforts, charities, and working with the collective consciousness of groups around the world. Both Saturn and the North Node are in Scorpio. This is the sign of the 8th House whose ruler is always Pluto. We have already seen how the 8th House and Pluto are emphasized in his chart, and here is the third aspect of this trifecta, indicating once again that this soul will play a major role in global transformation of consciousness in some way.

10. In addition, Saturn is part of a huge Grand Trine in the Prince’s chart, in this case in the element of water or emotions. Grand Trines are exceedingly lucky, and trines represent a spiritual gift that we have come into the world to express. The three points of this Grand Trine are Saturn in Scorpio, Jupiter in Cancer, and finally Neptune and Chiron in Pisces in the 3rd House. We have already discussed Saturn and Jupiter, the compassionate transformer with humanity. However Neptune, the Visionary, in the 3rd House of the mind indicates a highly refined mentality that is connected to the Inner Realms of Spirit, and often meant to communicate higher spiritual principles to others. In Pisces, the Prince will receive a lot of information through his dreams and through meditation or contemplation, marking him as a channel for higher consciousness thought.

11. With Chiron close by this can be greatly healing for others. However, since Chiron represents our childhood wounds and limitations, this placement indicates that this spiritual Visionary connection with the Divine may be stifled in his position as the future King or monarch of England. His interest in the Other Worldly may not be understood by some of the other royals, much as his grandfather, Prince Charles, was denigrated for his interest in homeopathy and other spiritual matters two decades ago.  So this sensitive soul may suffer, or be wounded by having to suppress this part of himself, either within his family of origin, or to the public. In the 3rd House it means that he may not be able to speak his higher truth for a long time, and that a part of him will long to return to the spiritual worlds, feeling that this world is too hard or too difficult to bear. Eventually however he will find a way to express this more advanced spiritual perspective with the world in his leadership, perhaps through the emotional aspects of simple kindness, justice and compassion for others. This activation of this Grand Trine is part of the great gift that he will bring to the world in his ruler ship and destiny.

In addition, this lovely Royal baby was born on the Feast Day of Mary Magdalene, perhaps a reminder of the importance of his destined altruistic work in the world. In numerology 22 is a master number, the number of a soul who has the capacity to express mastery in the world. When we add the number of the month, day and year it equals 17, which reduces to an 8, a sign of one who is able to tap into the energies of the Above and bring them into the world of the Below. All in all, this is an amazing chart of a highly conscious and advanced soul who has come from the higher spiritual realms with a higher purpose for the upliftment of humanity, using the transformational powers of speech, compassion and heart to make a difference in the world.

To Find Out More About Your Own Personal Chart
Go to the Astrological Readings Page.