Divinity exists in many forms. It exists in you and in me, but it also exists in the aliveness of the Earth, the power of a sunset, the magnificent of the stars, and the sentience intelligence of the animal, plant and insect kingdoms. Yet these are the things we can see around us, the things that we can identify if we will but take the time to look. Yet since God, or the Divine is the power that moves the Universe, it exists even in the things that we cannot see. God is the Infinite Field of all that exists, so when we question whether God is real, we might remember that we are like fish swimming around in water wondering where that water is. In truth, we have been so long in the water that we have forgotten that there even is any water surrounding us at all!

Beyond the remarkable world of nature that we can observe around us every day, there are also other worlds intricately linked to this one, spoken of by the sages of ancient wisdom. These are worlds that are both larger and smaller than we are, but which are being observed and recorded by science today. We get glimpses of this in the images coming back from the Hubble telescopes, as well as the microscopic world of neutrons, protons and electrons that underlie the atoms that make up our reality. And today, with the advent of Quantum Physics, scientists have discovered an entirely new universe of vibrating particles and waves that is going on all around us. These particles vibrate like violin strings, and were once called the Music of the Spheres. This is the modern day concept of String Theory.

As we continue to examine this microcosm and the macrocosm, we cannot help but notice that the ordered patterns of the atom are also mirrored in the Cosmos, repeating in the solar systems, galaxies and stars. This reflects a divine Intelligence behind Creation, a concept beautifully expressed in one of the Seven Principles of Hermetics taught by the great master Thoth, the god of wisdom in ancient Egypt. “As above, so below,” Thoth reminds us, “and as below, so above,” reminding us that the Universe is holographic and self-reflective, and that we do have an effect upon everything around us. 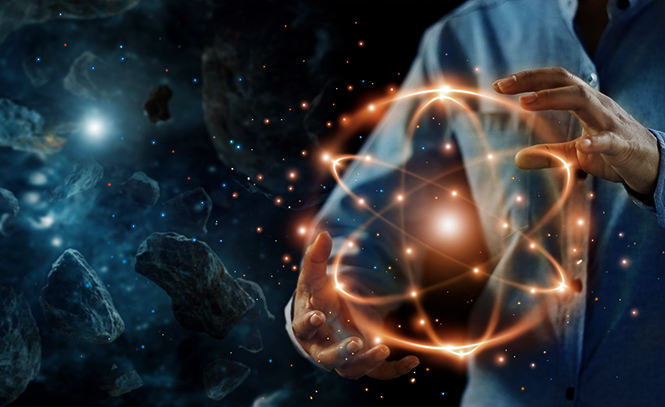 As we continue to contemplate the depth of modern day discoveries in science, we are humbled to realize that there are many realms we cannot observe with our five physical senses. We pick up only a faction of all the waves that make up creation. For example, dogs hear better than we do; cats see better than we do; wolves smell better than we do. In reality even our five outer senses are far less perceptive than we might wish. And what about the powerful bandwidths of energies that permeate our world every day? We see but a narrow bandwidth of wave forms that we call the visible light spectrum. But if we want to listen to radio waves, we can only tune into them through an “amplifier,” while the longer band widths of infrared, ultra-violet and gamma rays are far beyond the range of our normal sight. Yet interestingly enough these are the very wavelengths most commonly associated with angels, ghosts, and extraterrestrial visitations. Recent film footage just aired in Mexico show military planes patrolling the borders for drug smugglers, who had captured seventeen “flying objects” clearly visible on film in the infrared spectrum, yet nothing could be perceived with the human eye.

Through the use of telescopes or microscopes we can now “see” some of these realms, but what about the worlds that lie beneath what we can see? Finally as our technology is beginning to catch up with the world of the mystics, there appears to be a merger of science and spirituality occurring in the world today. Physicists like Michio Kaku tells us are at least eleven other dimensions that simultaneously co-existing alongside our own, and these dimensions are differentiated solely by means of the rates of vibration of the atomic matter, or the spin of axial fields. 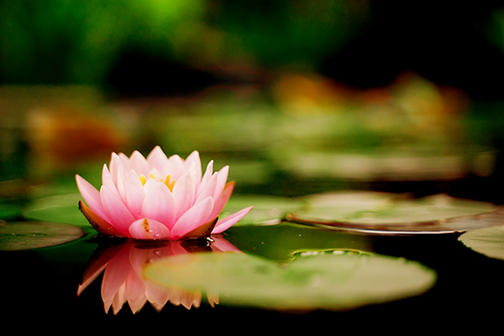 Finally science begins to meet spirituality, giving us evidence that the dimensions that the sages have long spoken, actually exists. Some teachers have called them the astral, causal, atma or Buddhic planes, while others think of them as the dimensions of the angels, fairies, and elementals. And at the higher dimensional levels, these are also the realms of the great Avatars and masters like Buddha, Jesus and Krishna who are committed to serving the Universal Plan of human awakening and evolution. As Jesus told us long ago, “In my Father’s House are many mansions,” and it is so. Let us continue to keep our eyes and ears and hearts open to perceive the fullness of the amazing world in which we live.

Tricia McCannon is an internationally acclaimed researcher, speaker and teacher, the author of some 35 DVDs and 13 On-Line Classes, all focused on the awakening of consciousness. She has four published books: Dialogues with the Angels Jesus: The Explosive Story of the 30 Lost Years and the Ancient Mystery Traditions Return of the Divine Sophia: Healing the Earth through the Lost Teachings of Jesus, Isis & Mary Magdalene and The Angelic Origins of the Soul: Discovering Your Divine Purpose (due out in Oct of 2017)