ARTICLE:
The Discovery of Giants on the Earth

For as long as human beings have walked the Earth there have been stories of  Giants. These beings have long been connected with the tales of extraterrestrial visitors who came from the skies long ago. Some of these “larger than life” beings were known as the Elohim, the great “Shinning Ones” or Gods of legend who brought the arts of civilization with them. They were the Anunnaki, the creators of modern day Homo Sapiens, who took a more primitive version of mankind and accelerated his development.

The Anunnaki Gods stood between 9′ and 18′ feet in height, large humans, by any estimation. And for the most human beings, an encounter with even an 9′ or 10′ large framed, highly intelligent, glowing “god” would have a profound effect.

Yet there was said to be another species that was even taller. These were known as the Titans, and these humans stood even taller than the Gods. The Titans were said to be as tall as 22′, 25′ and 30′ feet, and would have even towered over the Anunnaki Gods. Zeus was said to had his lightening bolt crafted by one of the Titans, and at various times the Gods were either in harmony with, or at odds with these highly intimating Giants. According to legend, eventually the Titans were defeated by the Elohim altogether, yet fossil remnants of both of these races remain, and have begun to turn up all over the world. 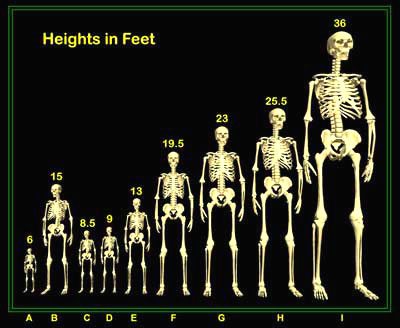 In recent years, with the advent of  earth moving machines, sonar devices, and areal satellite imaging, modern day man has begun to take another look at these legends and to discover that there is strong evidence that these myths have a basis in fact. Such advanced technology, along with the disciples of archaeology and anthropology, are continually revealing that there are many secrets hidden beneath the Earth’s crust that are now just starting to come to light.

In truth, the more we learn about  our own planet and the Universe, the more it appears that we are not alone in the Cosmos. There may be many different species of humanity scattered throughout the stars with variations of ourselves. When we look around us, we see some of these variations in our own societies with the five races: black, brown, yellow, red and white. We can also observe minor variations in children who are born with webbed hands or feet, or an extra digit on their hands. These are genetic throwbacks to a time when other  species walked this Earth, interbreeding with mankind.

This would suggest that there are many different sizes of human or humanoid beings out there, and this chart may give you some ideas about where we stand next to our larger or smaller brothers and sisters. We are the human being on the far left side at 6′ in height. Osiris, one of the kindest and most beloved of all the Gods, was said to stand as tall as 15′ and we can see that a 25′ Titan would have still towered over him.

Take a look now at some of the amazing evidence that has begun turning up all over the world. When possible I will try to indicate where the fossils were found, but as you might imagine, this information is highly suppressed by secular and religious authorities who do not want it to be known.

This image above on the far right is one of many large skeletons found throughout the Indus Valley, one of the four major 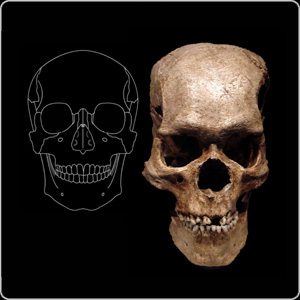 settlements of the Anunnaki Gods. Some of these skeletons appear to be about the same size as the one embedding in a stone wall, shown behind the cowboy on the left. 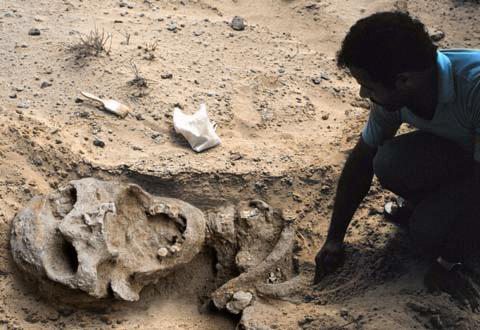 Of the two images below, the one to the far right is a head and skeleton found in Adams County, Ohio, and unlike so many of the large 7′, 8′ and 10′ skeletons that have been unearthed and taken silently away by institutions like the Smithsonian, this one was documented. To the left is a comparison photograph between a human sized skull and one found in West Virginia.

Below to the left is a long thigh bone found in the Euphrates Valley of Turkey in the 1950’s. It was one of many tombs where the remains of enormous Giants were found. 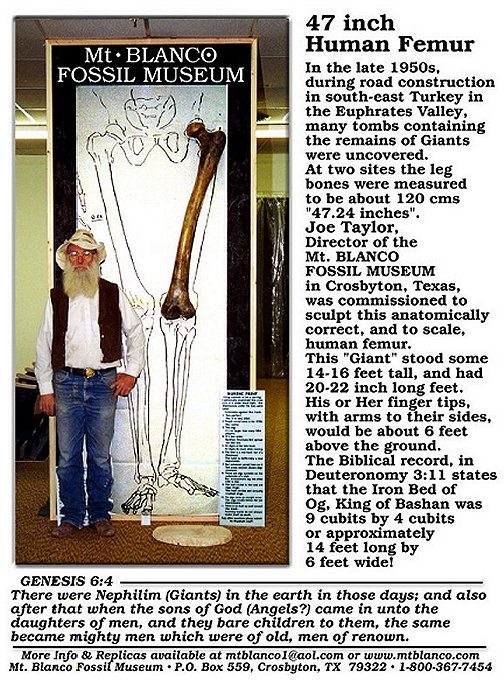 With a human being standing next to it, you can get a since of the scale and proportions of the

original body. To the right we have one of 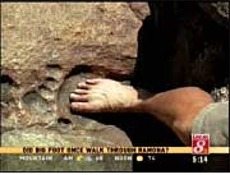 many giant footprints that have been found all over the world, including one in the Berlin Museum.  And below is an old photograph of a mummified 14′ tall Giant from Ireland. The Celts had legends of the Formodian Giants who were said to live in Scotland and the colder regions, probably trying to get away from the human beings who plagued them.

I have many incredible images of the fossil remains of Giants around the world, and if you are interested in knowing 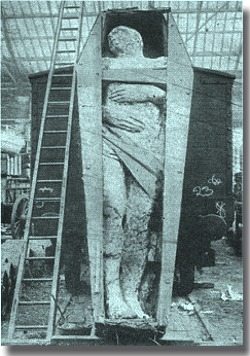 more, you can order my DVD called ANGELS & EXTRATERRESTRIALS where I show many of these images and talk about their discoveries. Here are just a few more of them to intrigue and inspire you, and to perhaps begin the quest within you to know more.

If You Want to See More, You Can Order the DVD here.